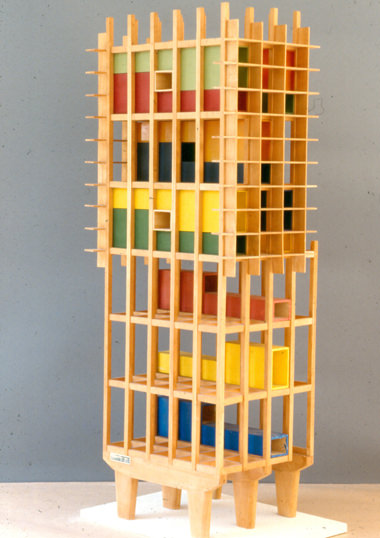 In 1944 he was asked to preside over the Planning Commission of the Front National des Architectes, a political organisation going back to the Resistance. In 1945 he obtained a commission for a unité d’habitation grandeur conforme in Marseille. This was an experimental project aiming to demonstrate the soundness of his principles on collective housing, in programmatic, spatial and technical terms equally. For this purpose he created the Atelier des Bâtisseurs (ATBAT) with the engineer Vladimir Bodiansky. 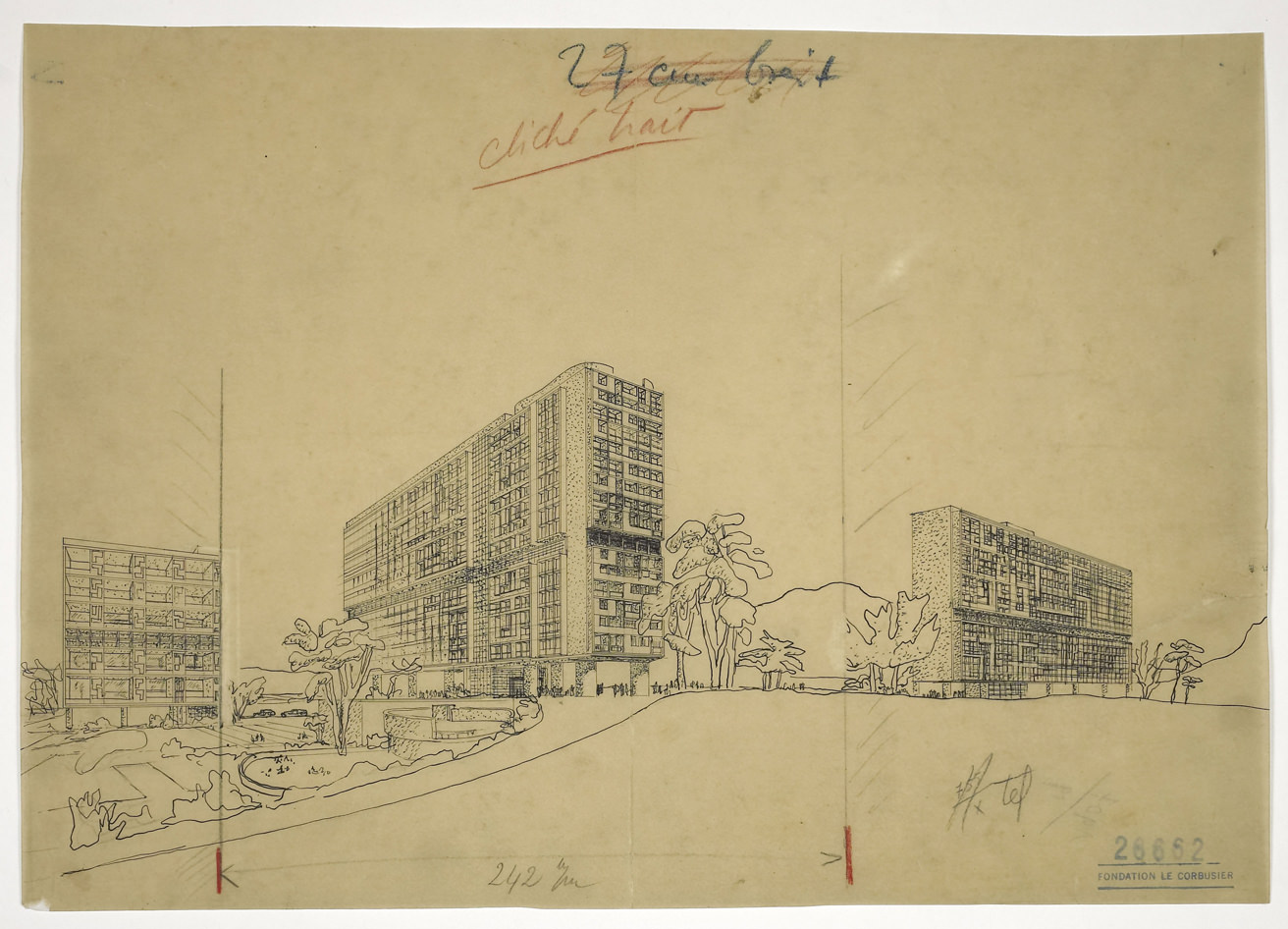 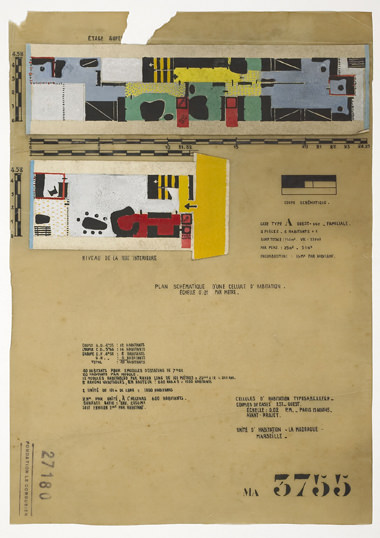 Completed in 1952, the Marseilles Unité d’Habitation was inspired by the principles of the immeubles-villas projects (1923-1925), in which apartments benefited from collective amenities: an integrated shopping street, a school, a gymnasium, a roof terrace with facilities, etc. The  Marseilles Cité Radieuse was a mass production prototype. Four other housing units were to be built, three in France, in Rezé-les-Nantes (1948-1955), Briey-en-Forêt (1956-1963) and Firminy (1959-1967), and one in Germany, at Berlin-Charlottenburg (1956-1958). 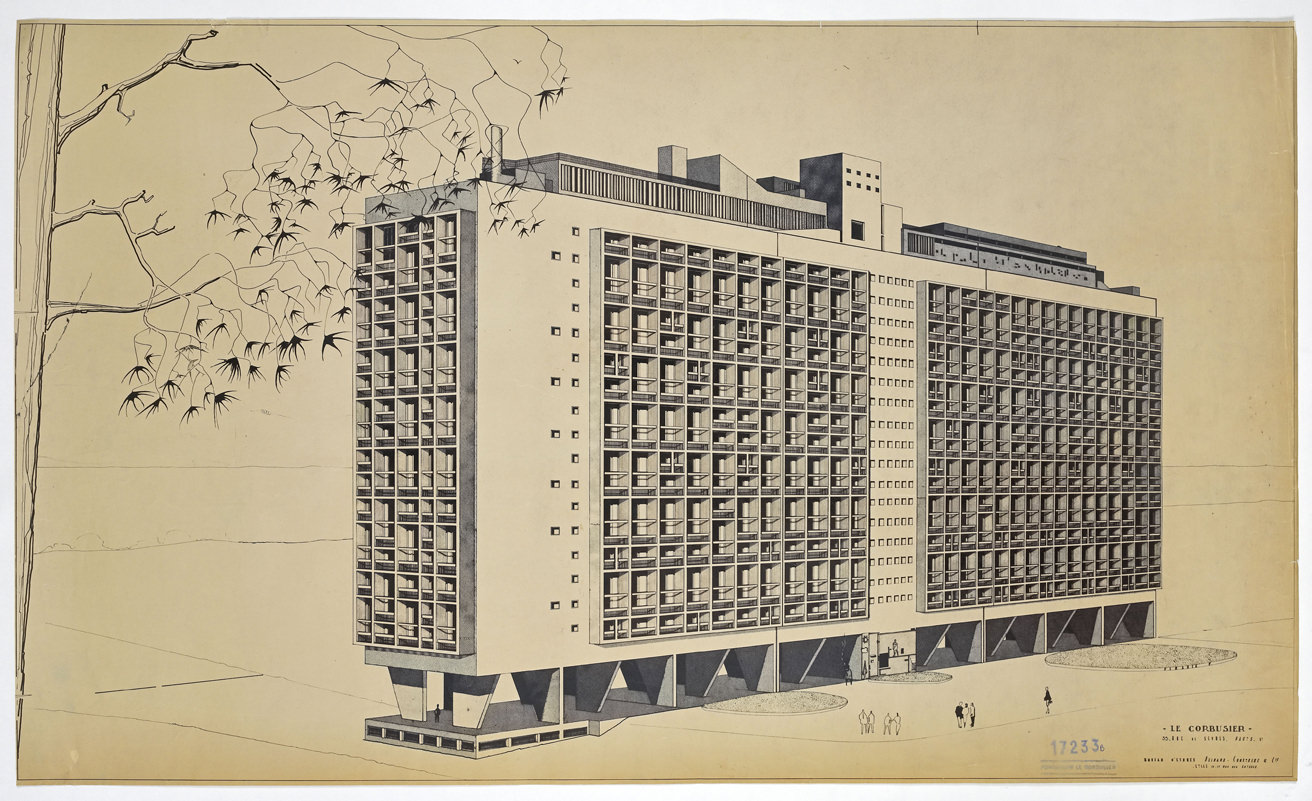 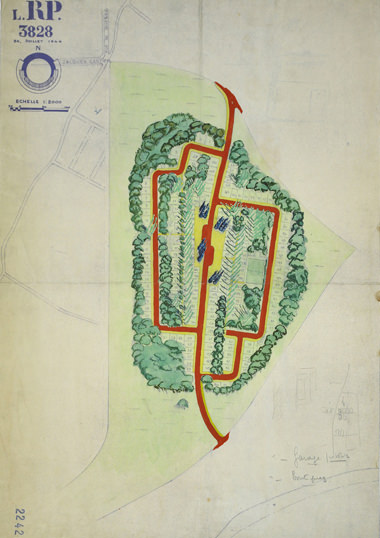 As part of the French postwar reconstruction programme, the Ministry of Reconstruction and Urbanism (MRU) appointed him as architect and town planner in La Rochelle-La Pallice (1945-1947), but his long-term plan ran up against residents’ and local authorities’ desire for a rapid resumption of economic activity. In the east of France, in Saint-Dié, where Le Corbusier had no official status, he devised a Ville radieuse-type plan on a war-flattened site (1945-1946). Neither these plans nor those for an extension to the town of Saint-Gaudens (1943-1946) came to fruition. 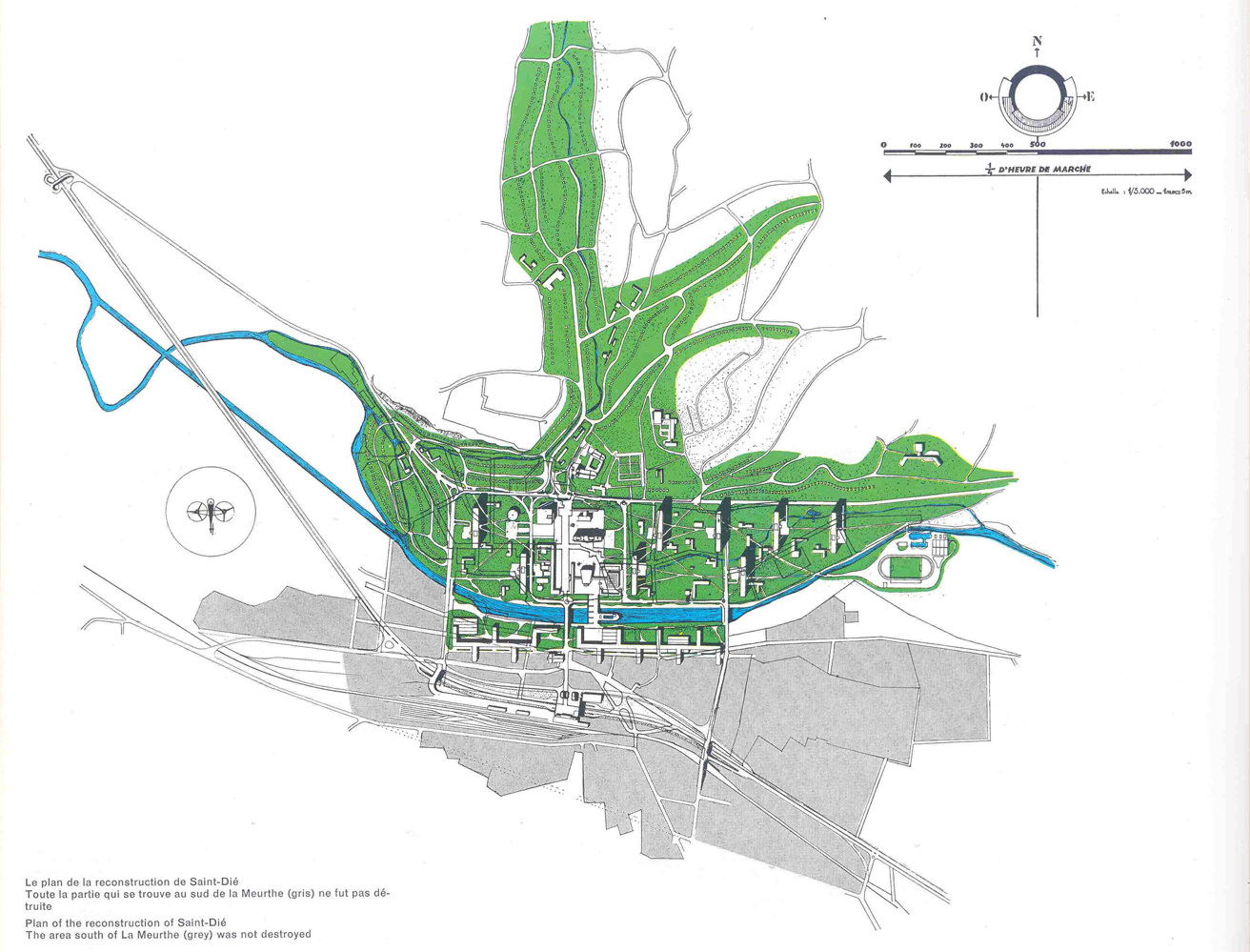 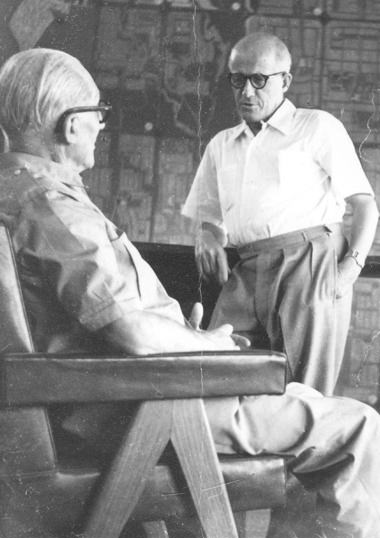 It was in India, in Chandigarh, from 1950 to his death in 1965, that he would be given the chance to test his theories. Wih the on-site assistance of his cousin Pierre Jeanneret and the British architects Maxwell Fry (1899-1987) and Jane Drew (1911-1996), Le Corbusier drew up plans for the new capital of the Punjab and completed three important buildings: the High Court (1952), the Secretariat (1953), and the Assembly (1955).
After the second world war, Le Corbusier was solicited worldwide for projects, lectures or consultations. At times the functioning of his architect’s studio, run by André Wogenscky (1916-2004), and the monitoring of his projects suffered from this situation. 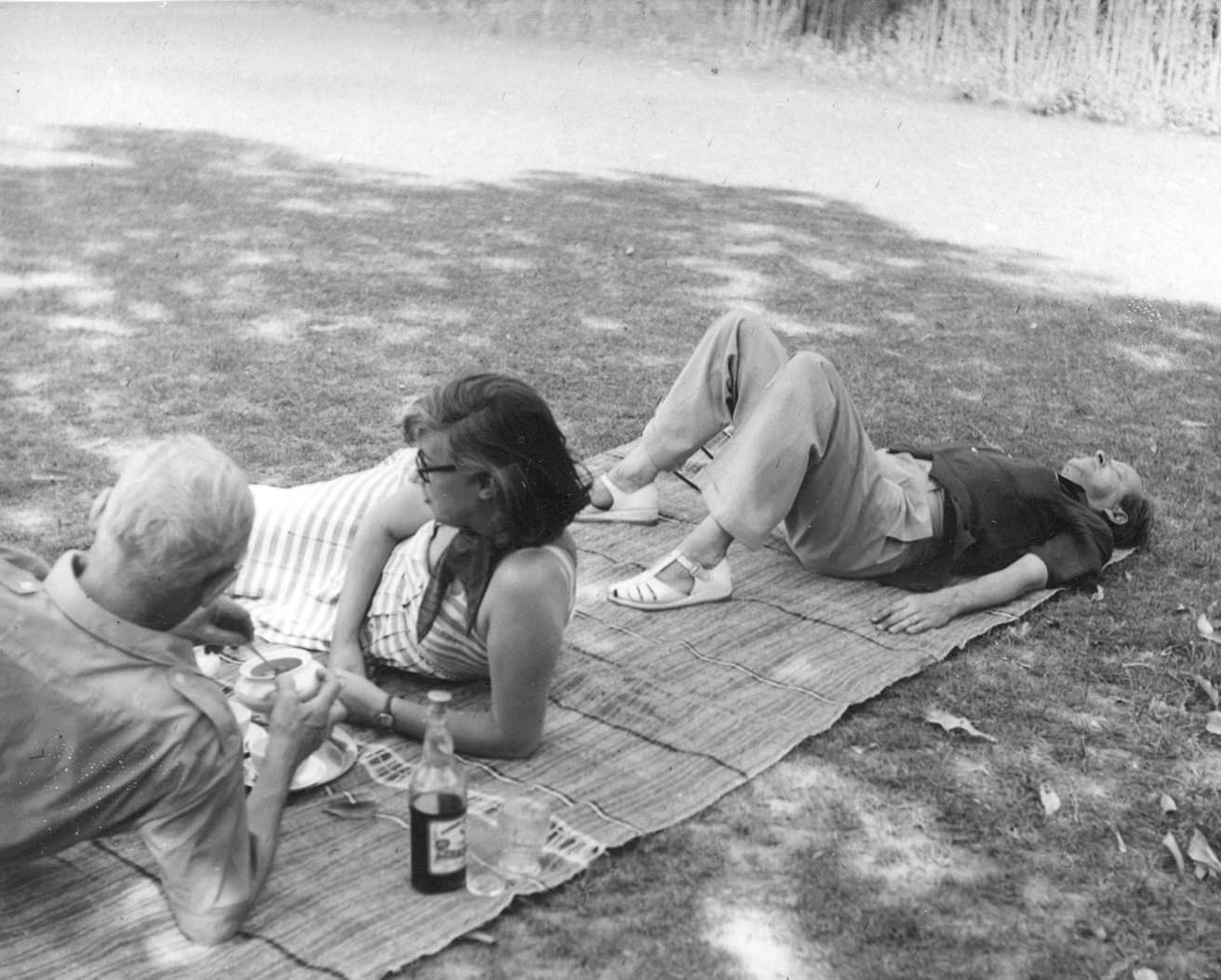 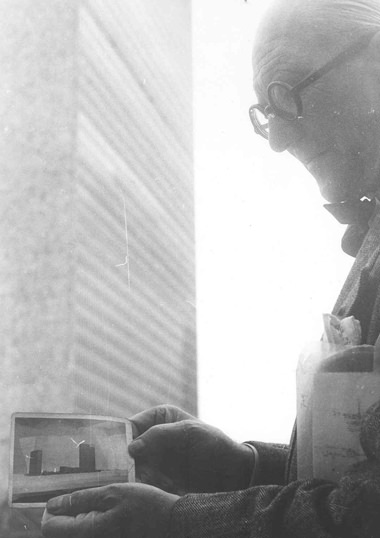 In 1946-1947, he travelled to the United States to conduct a fact-finding mission and took  part in the choice of a site for the United Nations headquarters. He completed the  Doctor Curutchet House in Argentina (1949), the Museum of Western Art in Tokyo (1957), continued his work in Chandigarh and in Ahmedabad built the villas Sarabhai (1951) and Shodan (1951), as well as the Mill Owners Association Building (1951) and the City Museum (1951). He also built the Carpenter Centre for Visual Arts on the Harvard Campus in Cambridge, Massachusets (1961), his only North American realization, and in 1962 he received a commission for an exhibition pavilion from Heidi Weber in Zurich, Switzerland, completed after his death.
In France, in addition to the unités d’habitation, he built a factory in Saint-Dié (1946-1950) and the two Jaoul Houses in Neuilly (1951), launching a new architectural trend named Brutalism by the art historian Reyner Banham. 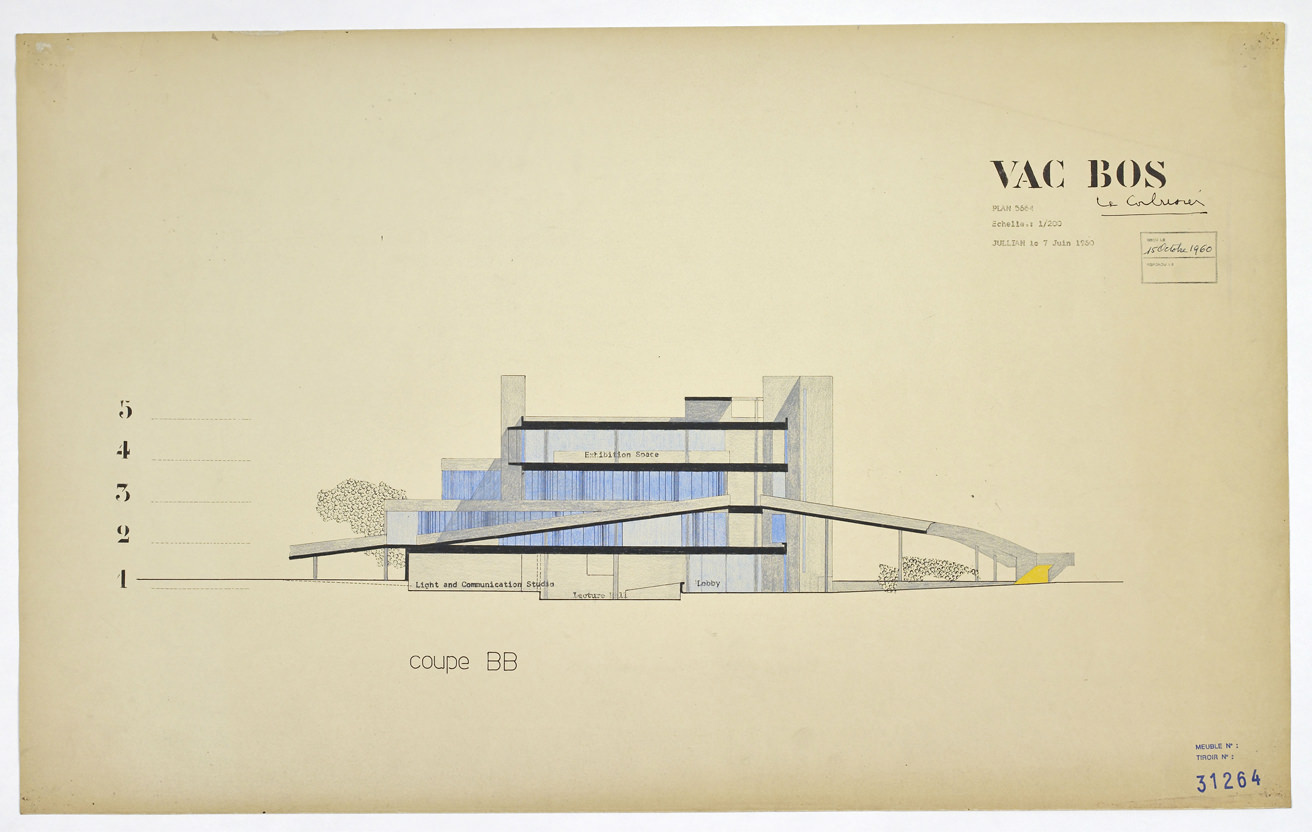 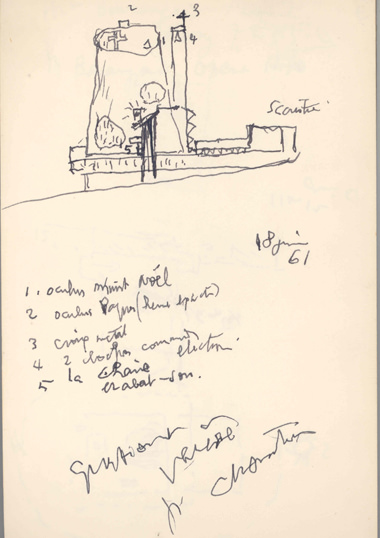 He also received several commissions for religious buildings that were to play a major role in the renewal of religious art after the Second World War: he built the Chapelle Notre-Dame-du-Haut at Ronchamp (1950), the Sainte-Marie de la Tourette Monastery near Lyon (1953) and was responsible for the preliminary design of the church of St. Pierre de Firminy, to be built after his death. This is located right at the centre of Firminy Vert, an extension of the old mining town of Firminy, built by Le Corbusier’s followers along the principles of the Athens Charter. Near the church and not far from the Unité d’Habitation already mentioned, Le Corbusier also designed the Maison de la Culture (1956) and the Stadium (1956) which, together with the church, constituted the new civic centre of Firminy Vert. 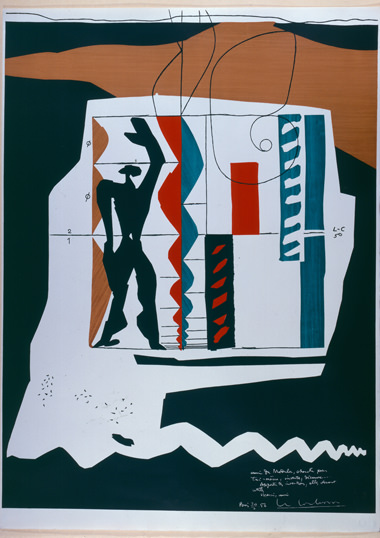 Despite these numerous requests, he enriched his artistic palette by starting to design sculptures with the Breton cabinet maker Joseph Savina in 1946. In 1948, he also drew his first tapestry cartoons and until his death regularly spent his mornings painting. It was also at this time that he designed the Modulor, a new measurement system based on the proportions of the human body. Begun in 1945, this research was used in building the Marseilles Unité d’Habitation and was first published in 1950 [11]. 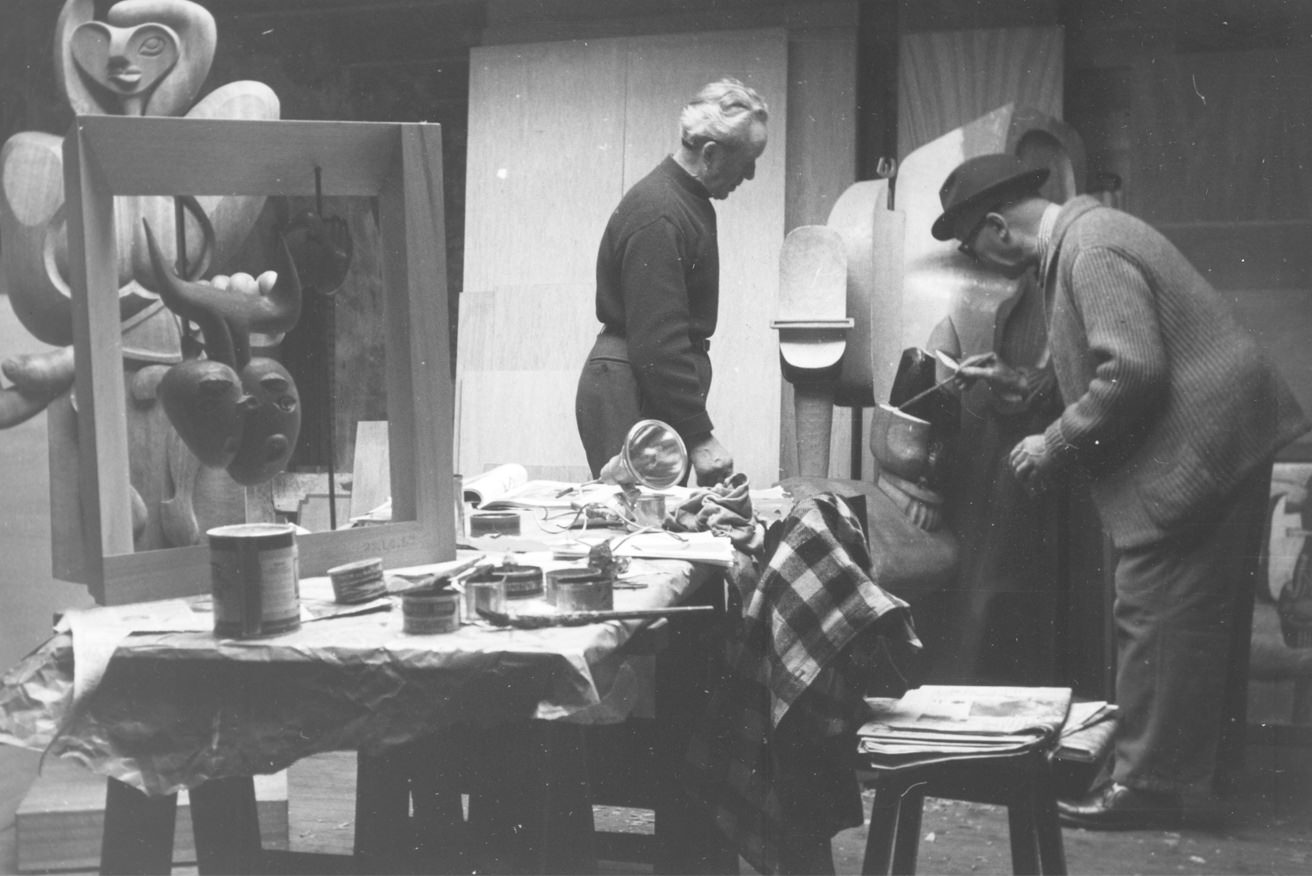 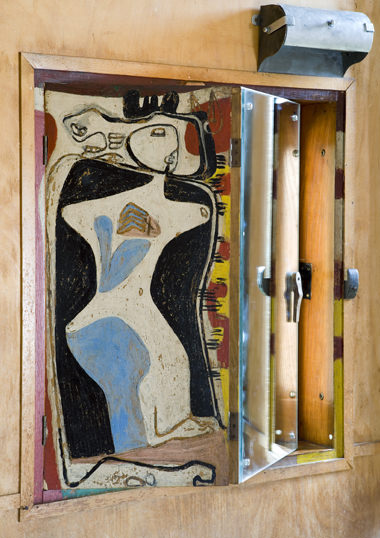 In 1957 Le Corbusier was deeply affected by the death of his wife Yvonne. In his closing years he was still involved in numerous projects, such as those for a computing centre for Olivetti near Milan (1961), a Palais des Congrès in Strasbourg (1962), the French Embassy in Brasilia (1964) or the Venice Hospital in 1964.
On August 27, 1965, Le Corbusier died in Roquebrune-Cap-Martin. He had spent his holidays there since 1949, and had built a modest holiday cabin there in 1952. He was buried in the Roquebrune-Cap-Martin cemetery following a national funeral in the Cour Carrée du Louvre. 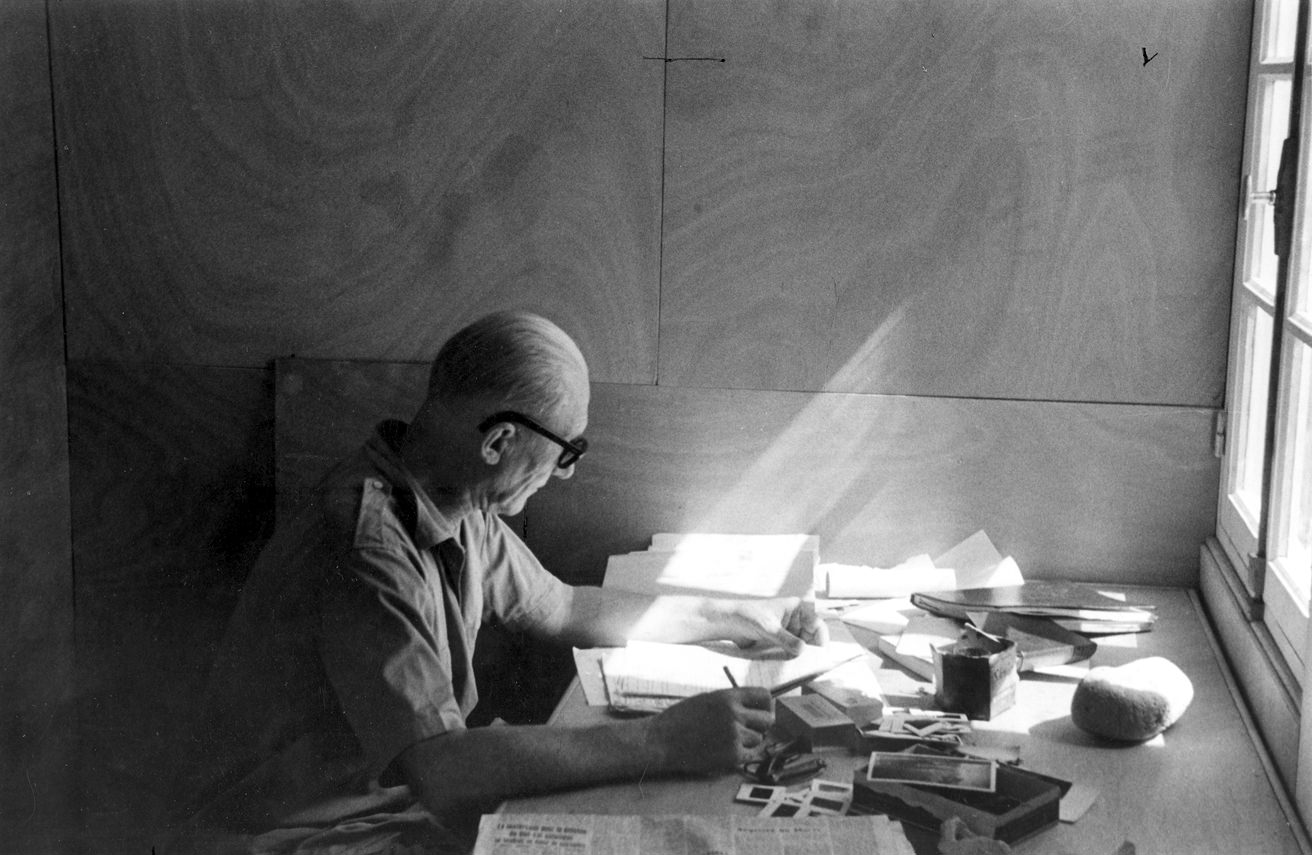